Da Vinci: The Genius was a travelling exhibit that visited the Philippines September of 2012. It was accommodated by The Mind Museum in Bonifacio Global City, Taguig. It claimed to be the most comprehensive exhibit of the life and the works of the multi-faceted genius, Leonardo da Vinci.

Leonardo da Vinci is an artist, scientist, inventor, sculptor, musician, engineer, mathematician, and architect. If this does not impress you, I don’t know what will.

This is going to be a long post because I will walk you through the whole exhibit.

Let’s start off with The Father of Flight.

“For once you have tasted flight, you will walk the earth turned skyward, for there you have been and there you will long to return.”

Da Vinci was mesmerized with the idea of man flying like birds that is why his initial works on flying machines are based on wing movements. Most of the ideas sketched in his notebooks (which by the way are written in mirror image) foreshadowed the modern parachutes and helicopters.

The displays in the Mind Museum include 3D models of his inventions, including the Aerial Screw, which was an early concept of the helicopter propellers we have today. 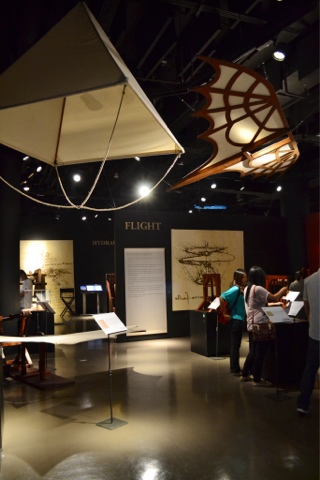 The next section was called Military Engineering.

This genius expressed his hate towards violence but ironically, he designed numerous weapons of war. This is because most of his wealthy patrons back then needed weapons more than paintings.

In this section, there were a portable gun that shoots 11 bullets at a time, a canon that uses steam to fire instead of gunpowder, an early concept of a military tank powered by four men, and a military bridge design. This bridge is my favorite because it is made without nails or ropes. The logs are just arranged in a way so that the more weight it supports, the stronger it becomes. Pure genius? I agree. 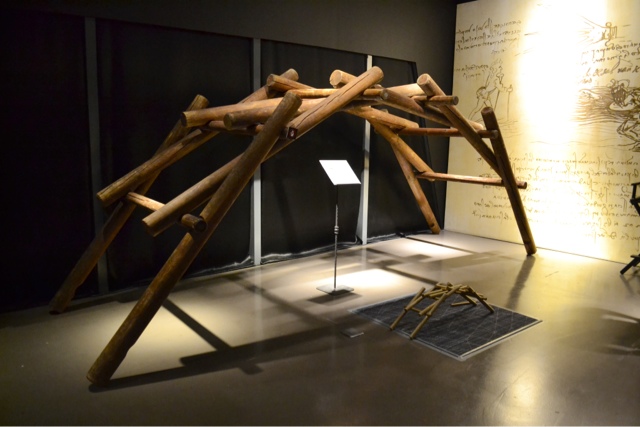 On the Aquatics and Hydraulics section,

it could be observed that the inventions are still war-focused. Leonardo (yaas, first name basis) understood a submarine as “a ship to sink another ship”. He designed a submarine to attack ships by breaching the hull from underwater. His design on the SCUBA Suit is also for the purpose of either attacking or repairing ships from underwater.

The section about Music and Optical,

is where the most popular interactive display is found. It’s an 8-sided Mirror Room where one can see one’s self in all sides.

Da Vinci was illiterate which hindered his study of optics but his observations and experiments led him to important conclusions. He was probably the first to write about stereoscopic vision, which is the way both eyes work together to gather information about an object.

“The eye, the function of which is so clearly demonstrated by experience, has been defined until the present time by a great many authors in a certain way but I find it to be completely different.”

Our genius here was not just into visuals, he was into music as well. He had a production called “Masque of the Planets”, which impressed Duke Ludovico il Moro, by his ability to direct court performances. He also made improvements to musical instruments including the portable piano, the double flute, and the mechanical drum. 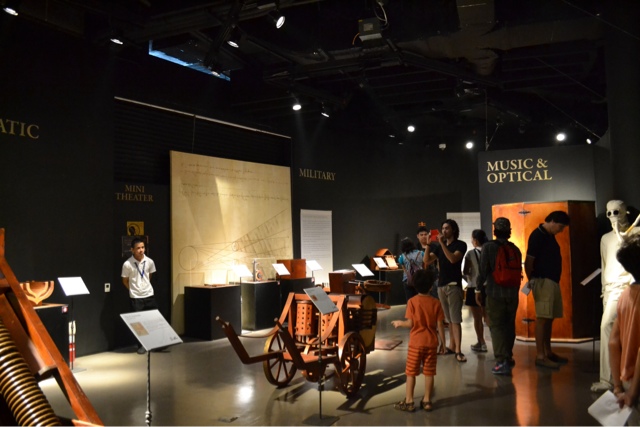 On the section about Renaissance Art,

it was discussed how Leonardo da Vinci started as an apprentice but he turned out to be the one who introduced a new technique to his mentor. Instead of the usual tempera technique, which mixes hue powders with egg, Leonardo mixed pigments with oil. His master was so astonished that he never commissioned a painting again.

Of all Da Vinci’s works, two are most celebrated — The Mona Lisa and the Last Supper, which by the way I’ve seen both in person. (I can’t wait to write about it.) Both paintings have their stories and secrets, and some are revealed in this exhibit. 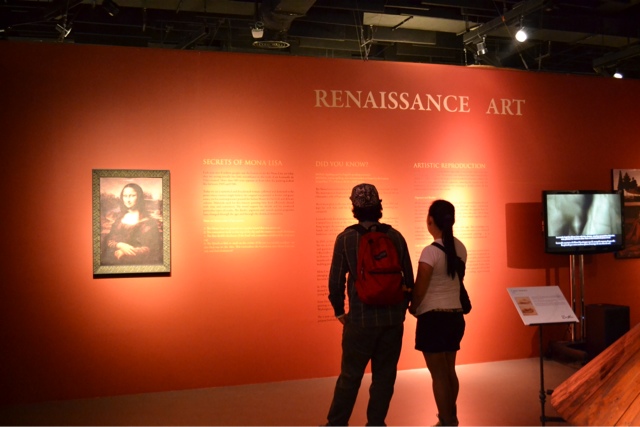 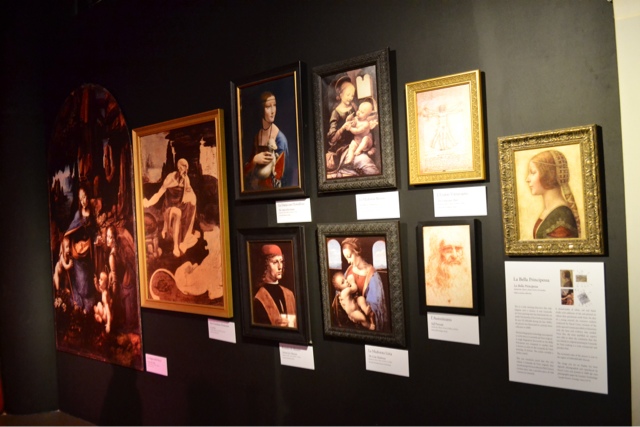 The rest of the exhibit showcased Da Vinci’s codices, mirror-image handwritten manuscripts. There are over 6000 pages that survived to this day, that’s 10 known codices, displayed in different museum, archives, and libraries around the world.

Some of the pages are sketches of human anatomy. His sketches are so detailed because he was given permission to dissect human corpses at hospitals. He had more than 200 drawings after studying 30 corpses. His study of anatomy was used to carefully delineate naked figures in his art. He was prepared to publish a theoretical work on the topic but unfortunately, this book, under the heading Treatise on Painting is published long after his death.

Studying the human body so keenly, he learned and discovered a lot about it including antheroclerosis, which is the hardening of the arteries. Da Vinci was alsi the first naturalist who turned to Mathematics for a key to understanding the human body. He showed this through his illustration of the Vitruvian Man, which is a representation of the human proportions.

Near the end of the exhibit was Leonardo’s concepts about Physics, where you can test the concepts yourself with the interactive miniature models.

*Information stated in this post are from the exhibit write-ups, the 50-minute audio-visual presentation, and/or the exhibit’s official program.